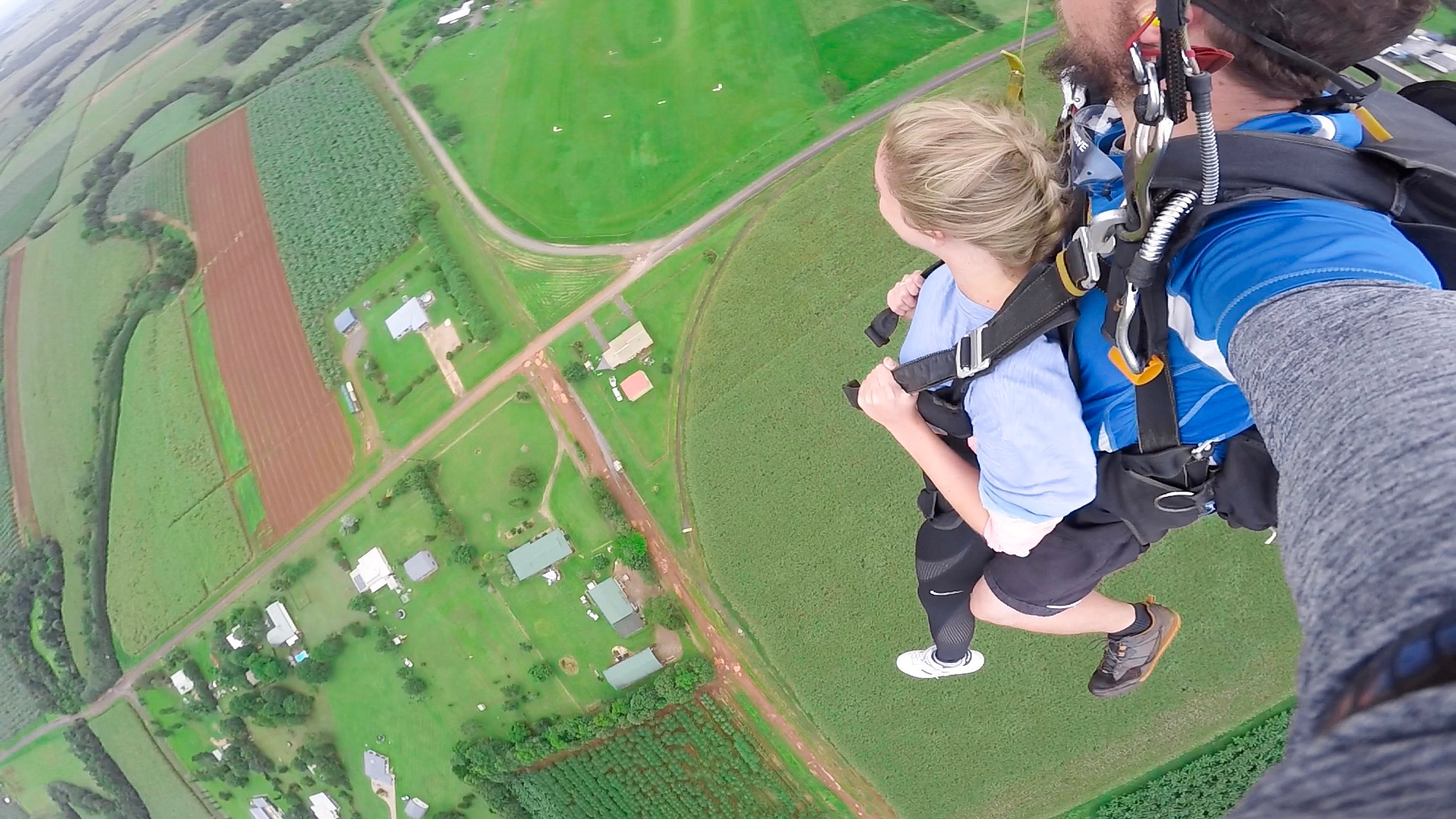 Skydiving’s history dates much further back than the first successful parachuting venture. The concept of humans soaring through the air began in the 12th century, when the Chinese practiced base jumping from cliffs using primitive parachutes.

Free-falling technology was later improved upon when Leonardo da Vinci designed the first parachute in 1490. In the centuries that followed, multiple parachutes where built and tested by jumping off buildings.

The first official jump from an airborne vehicle occurred when Jaques Garnerin gracefully descended over the city of Paris, but it was a few hundred years before skydiving evolved into the sport it is today. Of course, that is because planes were not invented until the early 20th century.

Once airplanes were in use though, it didn’t take long for people to jump out of them!  After several parachute improvements, Grant Morton and Captain Albert Berry were evidently the first to jump when they each parachuted out of an airplane in 1911 and 1912, respectively.  A few years later, Georgia Broadwick completed the first freefall.

The military quickly adopted the idea of using parachutes and incorporated skydiving into their missions. Jumping out of planes also became more popular and competitive.  Learn more details about the evolution here!

Today, skydiving is quite the sport; groups create sky formations, people soar through mountain ranges with wingsuits, extremely high altitudes have been reached, and untrained citizens all around the world can experience the invigorating experience of skydiving with a tandem freefall!

If you make the decision to free fall through the atmosphere, perhaps you love a thrilling rush of adrenaline, or you simply have to check skydiving off your bucket list, there are a few questions you may have.  Most first-time skydivers may be wondering…

This is probably the number one question.  Does it feel like your falling?  Floating?  Flying?  I would argue for all three.  Yes, there is a bit of a drop when you first leave the plane, and you’ll probably even flip over.  I ended up doing a twisting side somersault, and it was wild but tons of fun.  If you’ve ever jumped off something very high (such a a 10m diving board or large cliff), the feeling is quite similar.

After a few short seconds though, you’ll hit terminal velocity (calculate yours here), and the falling sensation is totally gone.  This is where the floating comes in.  It almost seems like you are suspended in mid-air with a boatload of wind coming at your face.

Next, when the parachute opens, you’ll get to experience a whole new feeling.  You’ll basically be flying, gently approaching the earth and doing a few fun dips and turns.  I would compare it to riding circular swings at an amusement park.  If you have ever been on “Soarin’” at the Epcot theme park in Disney World, it is also very accurate to a parachuting experience!

What should I wear?

You’ll want to find a good balance of not too-tight and not-too flappy.  Thus, relatively loose-fitting clothes that stay close to your body make for a comfortable jump.  A pair of joggers and a long sleeve t-shirt seemed to do the trick for me.  Some of my friends were just fine in leggings or jeans.  Also, many skydiving companies provide jumpsuits if you are so inclined.

Additionally, consider the weather.  In warmer months, you can certainly get away with jumping in shorts and a short sleeve shirt.  However, that is not the case when it is already chilly outside, as it gets significantly colder when the plane door opens up a few miles in the sky!  Also, speeding through the air at terminal velocity certainly creates a nice wind chill.  Consider these factors when choosing your outfit.

Skydiving evidently becomes much less enjoyable in cold settings, as one instructor Greg informed me.  He makes a living jumping out of planes, has worked in several different locations, and even spent a few months skydiving in Utah.  “When I saw flurries and snow hitting the ground, I was out of there,” he revealed.

One final note on apparel: do not wear your favorite pants, as there is a possibility of sliding on your rear end or tipping to your knees during landing.

What altitude should I jump from?

Many companies offer multiple altitude options for difference prices, and you will need to decide before you sign up!  For example, Tandem Cairns offers a 10,000ft jump and a 14,000ft jump.  Naturally, I inquired about the difference.

Here’s what the instructor, Ben, told me:  “Higher is better, especially for first time divers.  When you are free-falling through the air, everything happens so fast and your brain often fails to process every moment.  So, you end up only remembering a portion of it.”  A 10,000-foot dive involves about 15 seconds of free-fall, which only ends up seeming like a couple seconds, according to Ben.  However, you get to plummet for over a minute when jumping from 14,000 feet, which creates a much fuller experience.  The choice is yours. 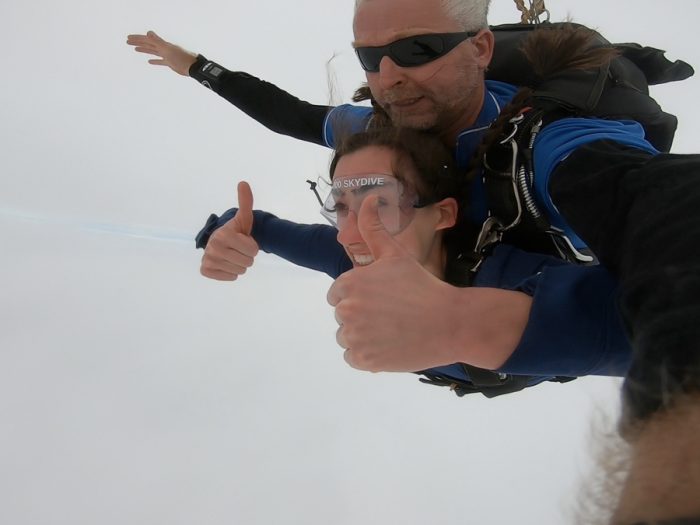 Thumbs up for free-falling! 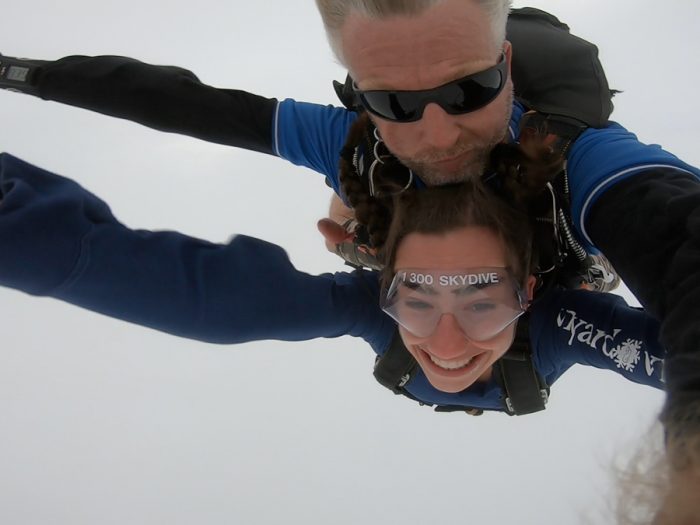 Just spread your arms and fly

I opted for the higher dive because all of my friends were doing it – I guess I was going all out!  Personally, I relished in every single second of the free-fall, and it was probably the most exhilarating portion of the jump.  It definitely felt like a full minute (I guess I was able to process the experience), but I am so glad it did.  Soaring for so long was sensational, thrilling, and quite possibly my favorite part.

Am I going to splat?

Probably not, and skydiving is not as risky of an activity as you may think.  Accidents are seldom, but the horrible consequences of something going wrong are quite high, so many people are fearful.  The odds of dying skydiving are approximately 1 in 101,083, (0.0007%), which is less likely than in playing football (1 in 50,000).

Accidents are much more prominent when divers are doing things the average person would deem as absolutely crazy, such as whirling though mountain crevices, dodging past rocks and trees, or landing on various moving things (like a car)!

Still, there is an undeniable sense of relief when the parachute opens properly and again when your feet hit the ground!

Can I bring a camera?

Short answer: No.  Should you purchase photos and videos?  Yes.  The faces you’ll make while plunging thousands of feet in the sky are probably going to be fairly entertaining.  Plus, you’ll want to prove to your friends and family you actually did it!

Evidently, “you are not allowed to take any camera footage while skydiving until you have successfully completed 100 jumps,” my instructor Marcel informed me.  It makes sense because new jumpers are focused on everything else that’s going on, but experienced skydivers can mindlessly soar, pull the parachute, and steer safely to the ground, all while posing for a few sweet GoPro shots. 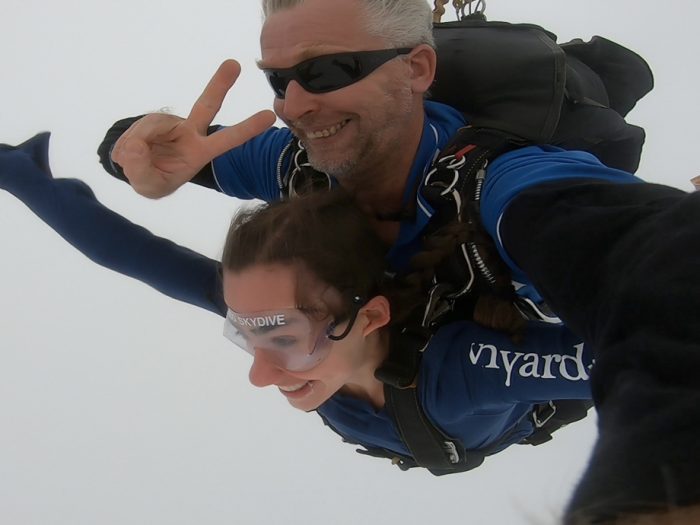 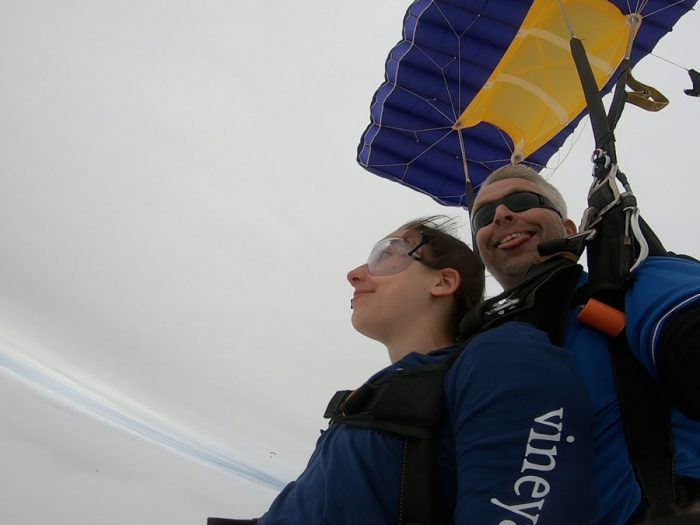 …and after pulling the parachute

Just be sure to smile, give a thumbs up, or flash any other signs you want all your followers to see when you show off your skydiving experience on social media!

All photos courtesy of Ben and Marcel from Tandem Cairns